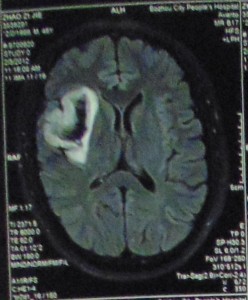 He was initially diagnosed with GBM in February 2012, in Shanghai, China. See imaging on right. His tumor was incompletely removed due to the tumor location and size. Over the international phone consultation, I suggested radiotherapy combined with Traditional Chinese Medicine at local hospitals in Shanghai, China. The late Senator Ted Kennedy was diagnosed with GBM and later died from this disease.

I saw patient in April 2012, in China. Patient is in near completion of his Radiation Therapy combined with herbal medicine. He was complaining that his thoughts were clouded or fogging, his jaw seems locked and sometime dropping a pen (right handed).

Physical exam: Patient’s surgical scar on his left temporal area appeared to be healing well. There were no significant neurological defects revealed. There were no significant signs on his chest, abdominal and extremities. I prescribed personalized medicine to him, and recommended to take NO chemotherapy. Based on my knowledge, there is no clear mechanism of the therapy; toxicity is too high and cost-effectiveness is another issue.

Between May to September, 2012, I consulted with patient over the international phone calls, learned that patient was doing well and many symptoms were improved, only a short period, may be a couple weeks, patient was recommended by other Doctor to take oral chemotherapy agent, he was started having clouded or fogging feeling again, dropping pen, he then stopped taking the chemotherapy. Five months later, I went to China, saw patient, I was amazed by he presented his painting to me, not only the art work is excellent, but also patient appeared happy and healthy. On physical exam, he appeared normal. I modified the personalized medicine to him and recommended to take my created medicine every day. 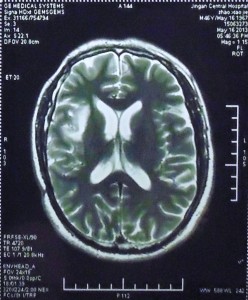 On this trip to China, May 18, 2013, I saw my patient in Shanghai, I was very glad that patient took my advise back to work after Chinese New Year. He is back to his normal life. Also, he showed me his art work, even more impressive. I modified personalized medicine to him and suggested that he could have medicine free for weekend. You can see from his repeat CT of brain, showed his normal brain tissues filled in surgical defected area, it is an amazing result. Patient reported NO side effects of the treatment and the personalized medicine is affordable. Patient is doing very well, continue to taking my modified personalized medicine, needs periodically follow up visits.